A break in the Algarve

Over the April 25 bridge and south. We are heading for Tavira where we are booked into an Algarve resort for a couple of days. Most of the way is on the freeways – well not freeways – this section costs us 18 Euros! Most of the major roads are toll roads – but you use them if you want to go big distances. When we get to the resort it is first things first and we do the washing and some shopping for food. G heads straight for the pool which is cool, but great until the sun goes down and the shivering starts. L makes us a beaut pasta dish, nice to have home cooked again. 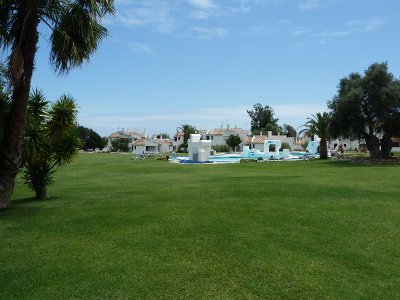 In the morning it is a bit overcast but we are determined and put on our bathers and go to the beach. This entails a 2 km bone rattling train journey from our resort to the beach. It is a good beach for lying out on, but the water is a bit too refreshing. G is the only one in past his knees. We have an explore about, lie out in the cloud for a while before deciding to head back. After the rattle back and quick showers we come out to find the sun has too! Bugger it we are going to Tavira. 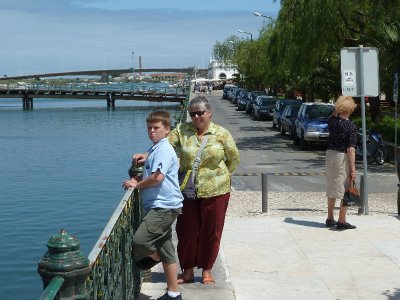 In Tavira, we have a wander around, watch the fish in the river – big buggers too, have an ice cream, head up the hill. We prop looking out at the views over Tavira and having a general slow time. Tavira is a nice town and looks a good place to wind down, but you have to get out to reach good beaches to enjoy. 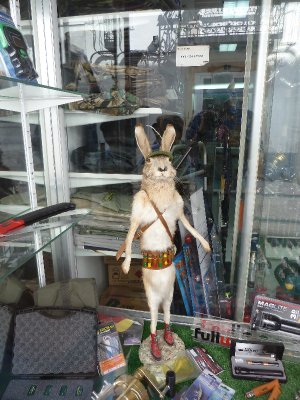 The bunnies fight back around here 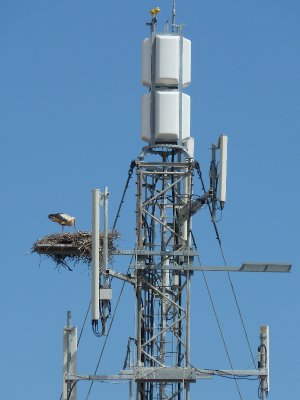 Stork's nest in a radio tower

After a slack day we drive back towards our resort. We have a look around Santa Luzia for somewhere to eat, and settle on Restaurante Baixamar on the water front. The owner and L talk me into some clams, and scabbard fish. G has Salmon, and L a seafood mix. It was all excellent. The clams were done beautifully in a gentle garlic and wine sauce, and the scabbard fish cutlets were grilled just right. The desert was simple chocolate or pineapple mousse, but very well done. All in all, a great restaurant with fresh simple food where they work within their limits. 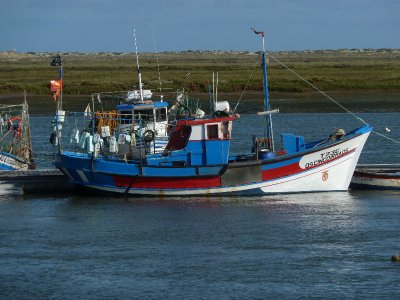 On reaching Lisbon, we are soon lost as the maps we have show either Portugal or the small area around our hotel. We park in taxi zone to talk to a policeman. Ignoring the taxis that seem to appear from nowhere to protest our cheek, he gives us directions in Portuguese which we have neglected to learn. The waving of hands is a start and we head off and are soon lost a bit closer to our hotel. We follow a few signs to the bigger hotels, when we suddenly appear on our small map and we can be guided in. We are at the Hotel Botanica which is very welcoming and we park the car out the front just before the street fills with all sorts parking, delivering and arguing.
We get a map which shows where we got lost, then walk down into the city. Well we walk as far as a funicular railway which we just have to go for a ride on. 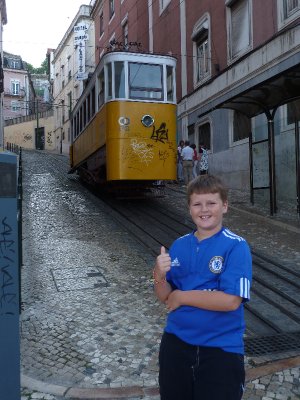 This takes us into Barrio Alto, where ther is a huge concentration of restaurants, bars, pubs and Fado singing shows. Given this is the night of the UEFA Champions League final, L has to suffer watching the game in a bar while we have tapas. We are in the Bar Artis and the food is good, L loved the octopus, G loved the flaming sausage (more to watch I think) and I loved the smoked ham and sausages. The game was good, but the result was not what I wanted. 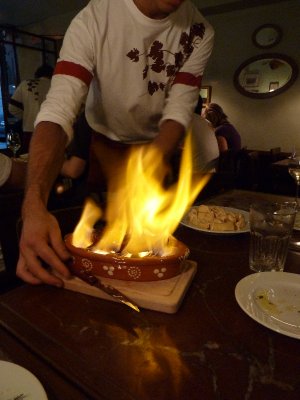 We walk back to the hotel, arguing about various routes until I am once again triumphant (but cannot claim it)
After our hotel breakfast we head up to the Castello. We take the tram. We get off too early. We have to walk half way around the Castello to reach the entrance. We are in. 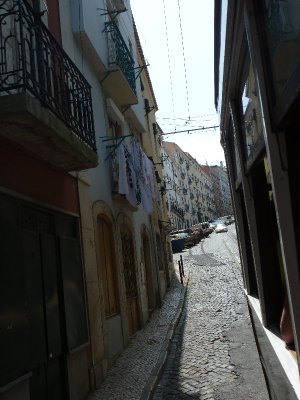 Where the tram goes 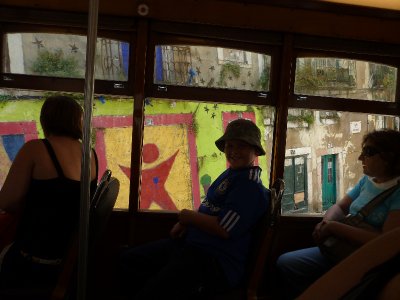 The castle is well situated on the local high point. The battlements are well preserved, and a few of the towers further up. This means you get an atmospheric walk with some great views over Lisbon. Not that the views are that much to look at. Lisbon has quite a bit of urban sprawl and it starts very close in. There is some interesting antiquities in the museum, and they have been excavating some of the older areas of the castle with Moorish and medieval remains. I thought it was well worth the trip. 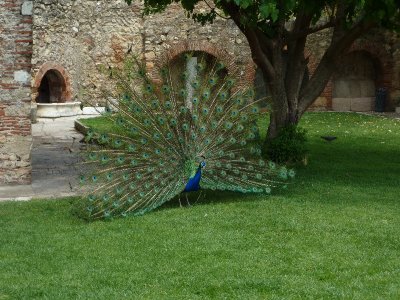 Next to the public toilets 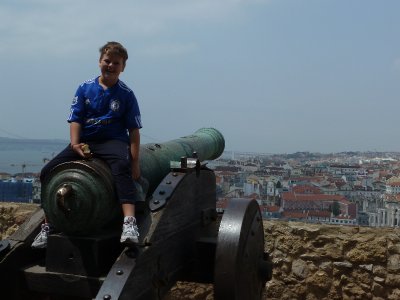 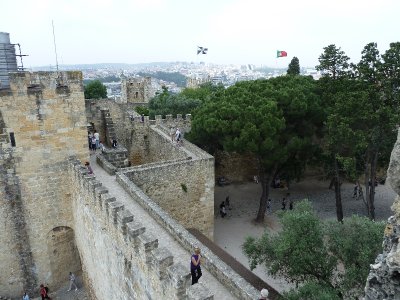 We take the little old rattler tram down the hill to pick up the flash new tram out along the river front to Belem. First stop is Pasteis de Belem where we buy their world famous Portuguese Tarts. And they are nice – very nice. Nearly as good as the ones in Johnstone St, Fitzroy. 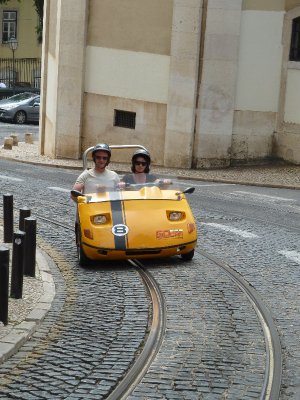 Go Car do it yourselfguides

We cruise to the waterfront (once we have found the underpass) and have a look at the Memorial to the Discoveries, a massive commemoration to the various navigators, captains and adventurers who covered the globe and made Portugal rich back then because they had a flag and the locals didn’t (see Eddie Izzard). I remember reading about this when I was a kid, and it had stuck in there at the back of my brain somewhere, so I had to see it. 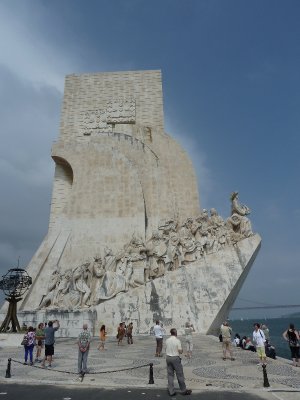 The monument to discoveries

Quickly up to the Torres De Belem, but no time to go in. 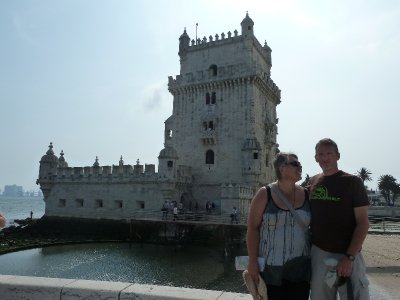 I want to get back to the Science and Technology Museum to see the World Press Photography exhibition. This is full of fantastic images from news, sports, reportage or projects. There were some very disturbing ones from Gaza, Iran and Iraq, showing a small bit of what really happens. There were some beautiful wildlife ones and some more uplifting people photos. Overall very powerful and moving.
We get back to the tram and head back in. We then get on the Disco funicular up to Barrio Alto and have a tapas dinner and some local wines at the Alfaia Garraferia (wine bar) in R. do Diário de Notícias and bloody good it was too. Back at the hotel, we finish off the Pasteis for desert. 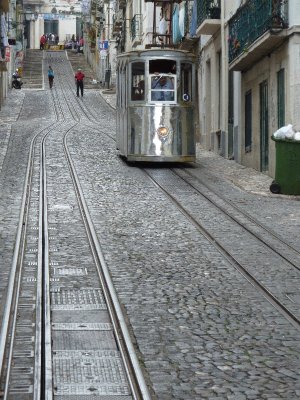 The other funicular coming down...

In the morning we pack the car and wait for the parking area to clear so we can leave. We have really enjoyed Lisbon and would have liked to spend a few more days here. We almost get lost leaving town, but manage okay.

Today we are on the road to another country. But first, a diversion into the West Gallacian coast is called for. We head down towards Sanxenxo on the main road, and then up the Ria de Pontevdra. We are stopping at Combarro, to have a look around what was a sleepy little fishing village, quickly adapting to a new life as a tourist stop. It is very nice to look around, with its rocky streets and seaside herreos (granaries). As the fishermen got wealthier, they decorated the houses more – keeping up with the Joneses, but in a sleepy stone village way. 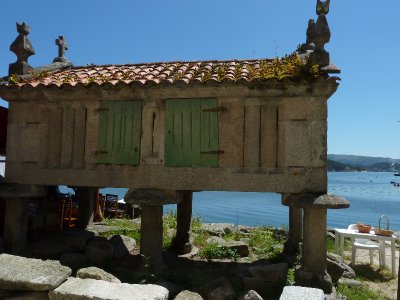 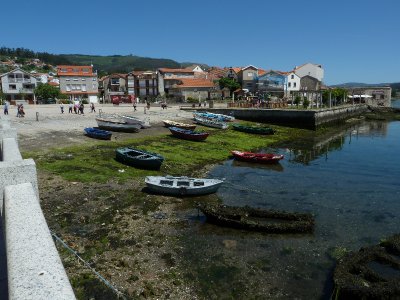 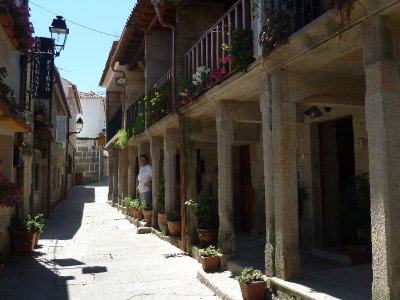 After this pleasant side tour we head across to Portugal. 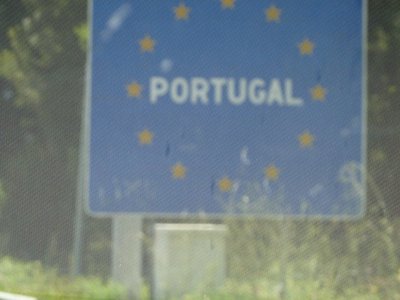 We have no guidebook, so follow what the Michelin map shows as a scenic route. It wasn’t. So we head back on the freeway and try another one a bit further down. It wasn’t scenic but we did get to the sea. It was freezing. Onwards and down to Coimbra. Into the hotel Oslo, and then up into the old town for a look around – and I do mean up. From our hotel close to river level, it would be at least 100 metres up to the top of the town. Because of the high outcrop it sits on, Coimbra was the natural spot to site a town. After time, the university came and has since taken over the top of the hill, all of it. 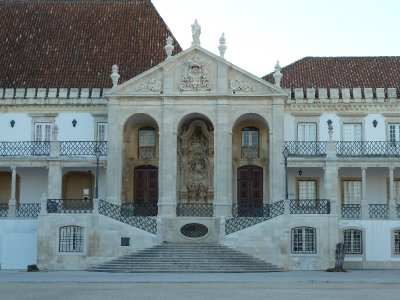 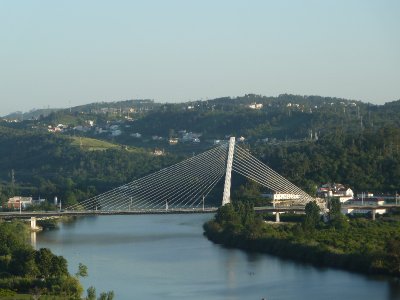 The original university buildings are beautiful, and set out with a great view over the river from their central Plaza. There are plenty of other places to see around the old city centre, very worth a tiring walk around.
As the sun sets, we wander back down to ground level and a typical Portuguese dinner of pizza. 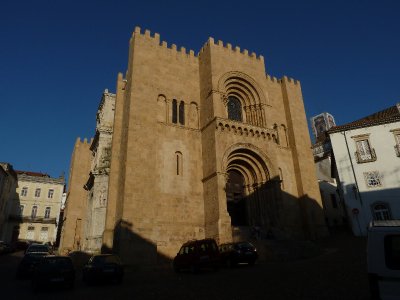 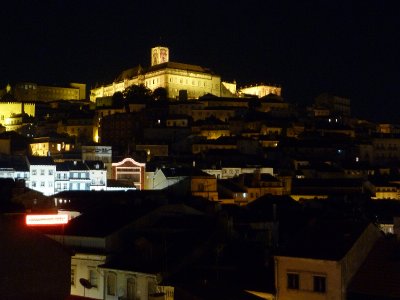 We set out after breakfast and head down to the river to have a look about. We walk along until we see a place where they do different rides for kids and adults. But all G can see is the Segway. So off he goes for 15 minutes of good fun on the 21st century version of legs. 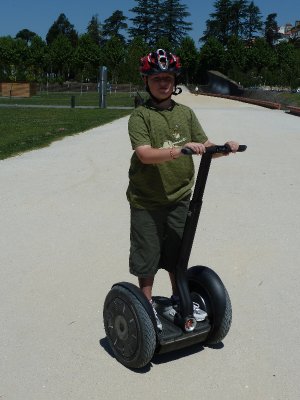 He loved the Segway 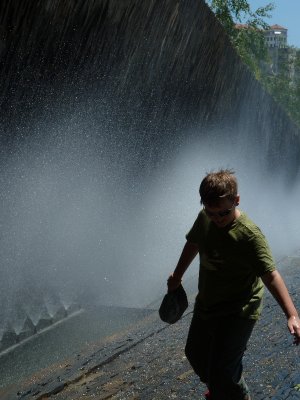 We head across the groovy pedestrian bridge to check out the pool over there and see what time they open etc., then cruise back for a drink. We are all full of plans of things to do, but instead decide an afternoon at the pool is much more in order. So we go and buy a towel and go for a recharge afternoon around the pool. 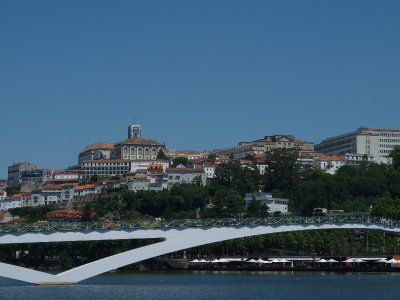 After brekky and check out, we head into the mountains behind Coimbra. We are in search of a schist village (I schist you not) After an hour of very windy roads (they don’t look that windy on the 1:1000000 map) and a few stops to let stomachs settle we come out to the higher part of the mountains above the tree line. Here Aigua Nova sits huddled as if for warmth and protection. 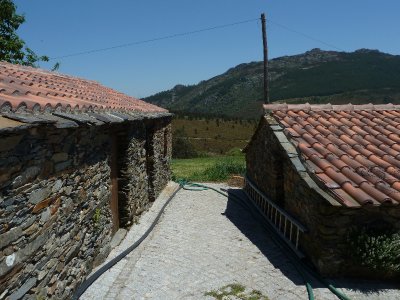 The Schist village of Aigra Nova

It is a clear day, but the air up here is cold and thin. There is no snow around, but you can imagine it appearing early in winter. There is a spring coming out of the rock and it is very cold and fresh. 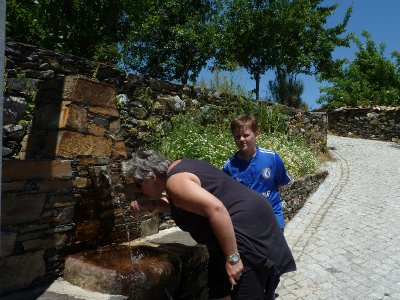 As we wander through the cottages, there is no-one about, but we can hear goats and sheep in behind the barn doors. Each of the houses is made from the local Schist rock, a bit like Castlemaine slate, piled together to form the walls. There is obviously an art to it, because I know if I tried any sort of wall with the stuff it would quickly collapse. 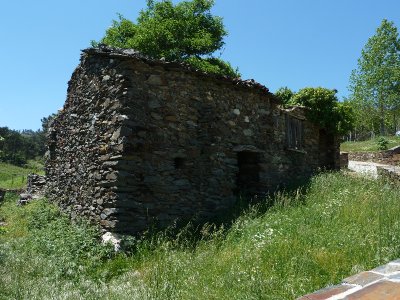 We head back along the windy roads to the toll roads south to Lisbon and we are off.