Up, down, up, down and up up and away

Today the team was up at 4 am to get down to the MAS office at 4:30 to see whether we had a seat. When we got in there was just us and a group of unreasonable Spaniards, and one service agent. The agent spent an hour trying to convince the Spaniards that she could not make airplane seats appear out of thin air. A second agent arrived as it was our turn, we wanted to know if we were on the new flight announced that morning as we had been there as long as anyone. To our dismay she said we' could go out to the airport on standby' and just before we could get over our shock and protest, added, 'but why not use your confirmed tickets for tonight?' Long exhale then smiles all around as it took the next half hour to print out our confirmation tickets - gold!

By the time we got back in it was 7am, and I stupidly suggested the Petronas towers. So we didn't go back to bed, but had a quick brekky before getting to the queue at 8:30. We were only behind 400 or so people, but got a time at 11:30. Stupidly asked some folks from the North UK what there accommodation, similar price and much more flash. What to do in the next 2 hours? We went to Starbucks and slept in turns until it was time to go up. 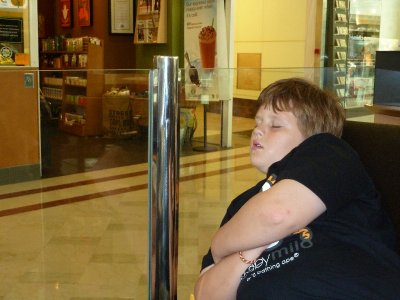 Half an hour later of Petronas ads, a safety briefing and a security scan we went up on the tower for 10 minutes. Great view, obscured by smog/smoke/clouds or volcanic ash. 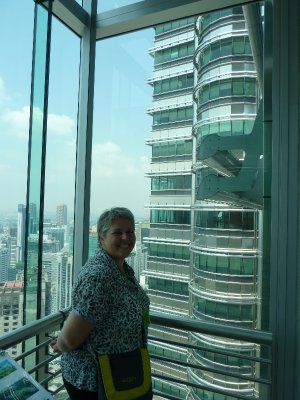 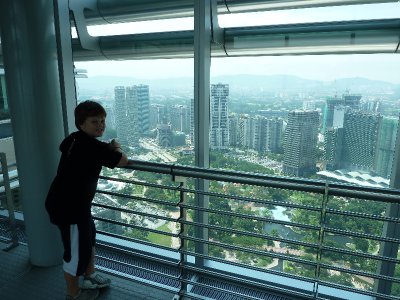 On the sky bridge

Back to Malaya Hotel for the last time, said goodbye to the dirty bathroom and non flushing loo, and headed of to KL Sentral train station to drop off our luggage - seems more certain to happen now, but won't believe it until French Immigration are rude to us. 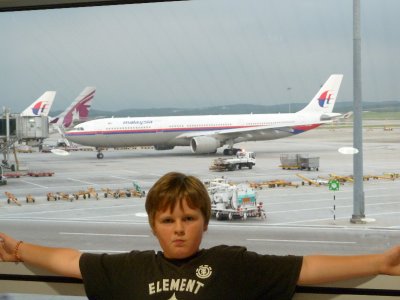 A bite to eat

Eating is also good here - on the walk home form Times Square to Chinatown we grab dinner at a restaurant opposite the Nova Hotel. It is the first restaurant in the block, famous for it’s ‘spring chicken and roast chicken wings’ and they are top stuff, as is their balachan eggplant. 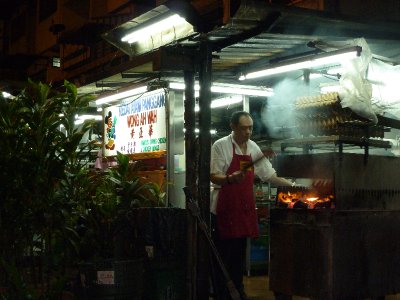 In china town, one night we stop at the footpath cafe and have satays, roti and nasi lemak, washed down with iced lemon tea (no milk) - the best satay ever in G's opinion.

Next two nights we are around the corner getting food from an open restaurant with a massive menu and a tiny kitchen. Once you order, it is easy to see how they do it - the waiters disappear off in every direction and come back with steaming bowls of great food. 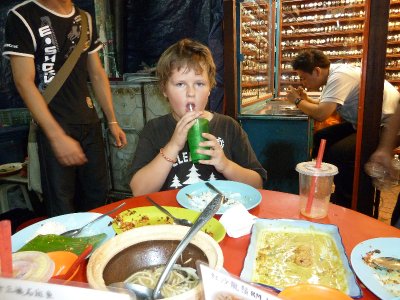 Drinks are good too - our favourite is the fresh fruit vitamised with ice to give a tasty fruit slushy.
G is a star with the food - he loves it all and scoops up the spicy chilli residue and scoffs it down when the spicy squid is finished!

So now we know Marko wasn't just pulling my leg about the Volcano, we have to keep up to date with all the action. Today is Monday 19th and Malaysian have told us there are no flights tonight, but we are confirmed on their first sure flight, the 27th!!! Hopefully the planes are flying well before that with Le Monde saying Germany, Holland and Spain are completely opening their airspace.

But to back a step... what to do in KL in 4 hour blocks while you are busy running back and forth to the MAS office at KL Sentral to keep on top of it. Not that they are giving us any more concrete information than anyone else including all on the internet, no one seems to want to make a call.

So 4 hours? Head to the twin towers for a free trip up to the sky bridge - but get there between 8:30 and 9:30 or you will miss out on a ticket - we haven't made it yet, being a bit slow in the morning or stuck in an internet cafe. Pretty flash shoppping at the base of the towers too in KLCC. How flash depends on which floor you are on. It seems in KL (as many others) the exclusives are on the ground floor, no doubt to get you in a buying mood. If thats a bit pricey for you head for the area around Times square where you get lost in the maze of levels and areas and lights and sales people. And if thats too rich for you, head for Pedaling Street in China Town where you can get genuine rip offs at a great price. Loved G's naivete when talking to another family about some video games - "I think these might be illegal" There followed a lesson on the pyramid of capitalism, where we lie on it and where the gents selling fake Rolexes are.

Get around on the Monorail or KL Rapid - no traffic interruptions and on the monorail you get to see lots. Otherwise walk and take it all in. 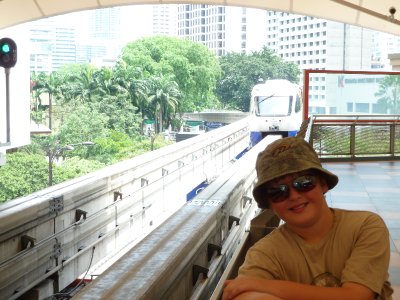 If shopping and hanging around the MAS offices does not suit you, then you could walk up the steep steps up the side of the KL tower through the rainforest and up to the camping ground, then over the rope bridges to arrive hot and sweaty at the Courtesy bus that will drive you up and down the other side! The view from the top is great, but would be spectacular on a clear day. A number of things to do down the bottom, but the one that caught G's eye was the flying fox off the side of the bottom level. 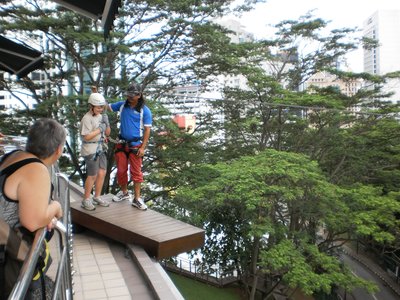 I always wanted to go to KL

A funny thing happened on the way to the Airport. The radio kept banging on about some volcano. At the airport a nice lady said we could go to KL or stay at home. Three tickets please! So off to KL to have a few days R&R before we get to Paris. 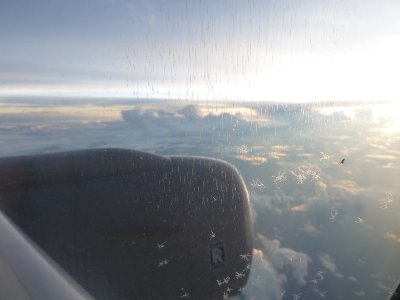 The plane trip was as usual, and at the airport we joined the throng trying to find out what is going on. No news, head for a hotel and take it from there. For our budget we get to stay in the aging Hotel Malaya. More to come...