Only two things on the agenda today, pretty simple really. We walk to Suidobashi station and catch the multiple connections to the Keiyo line. At Tokyo station, this means an 800m walk from the Yamanote line to the Keiyo line. We have had many occasions where the simple line map shows two lines interchanging at a station, only to find that means a 600m walk to the connection, in some cases being thrown out onto the street, as there are a number of different train companies around Tokyo.
We head to the flea market at Tomiokahachimangu Shrine to the east of Tokyo. There is a fascinating array of all sorts of stuff at the market which people can obviously sell on. There are people selling bits of jade, movie posters, sword bosses, pottery, coins, pins, used kimonos and yakutas, prints and all sorts of other odds and sods. It is fascinating, we pick up beads, coins and a votive tablet – I liked a small piece of jade but I thought the 5000Y asking price was a bit steep. We head on our way, picking up some sushi (surprise) and finding some cans of pancake drink (surprise, surprise) to keep us going. Next visit is the big one - we are going to see the Mouse. 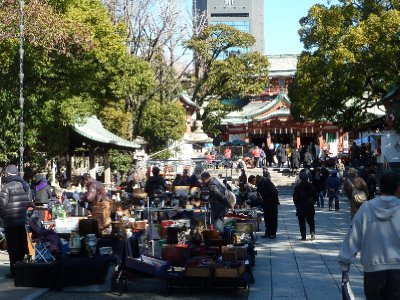 I know it is the weekend but an online predictor said there would not be many people there today. Which just goes to show you cannot trust every thing you read on line – really! I would have also thought the weather – clear but cold, 7/0 degrees would keep the crowds down. No such luck – don’t come on a weekend if you can help it.
Started as always with Star Tours, funny hearing it all in Japanese. A bit of dithering on G’s part saw us wandering around until we ran into Roger Rabbit’s Car-toon, a new one by me and with only a 20 minute wait. By the time we had decided what we wanted to do all the Fast Pass slots for the day had been allocated so we had to wait it out in all the queues. So we went on The raceway and then to Splash Mountain. Next G wanted to go for a paddle in the canoes, which proved to be a mistake as the man two in front proved to be a shoveller, nor a paddler. As a result, all four rows of people behind him copped a soaking. G ended up with a wet leg and glove, which at these temperatures quickly made him very cold. To warm up we went into the queue for Pirates of the Caribbean, one of the shortest for the day. This is themed a lot more on the movie than others we have seen. 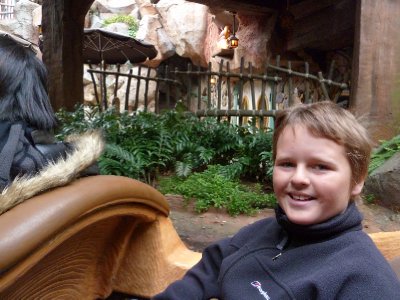 Just after the splash

Next we grabbed a bit of crappy food, and as we sat outside eating it, it SNOWED in Disneyland! To warm up we cuddled up with a few hundred of closest friends in another line. My decision to wear 2 jumpers, hat and gloves was paying off. I was hoping the queues would start to dwindle with the snow or with the sunset, disappointed on both counts. We finished off with Monsters inc, Buzz Lightyear and I managed to get G on Space Mountain, which he loved. By now it was getting late so we headed for home. 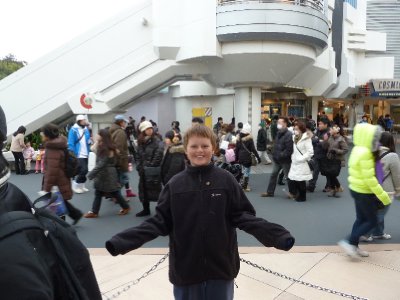 It's snowing at Disneyland!!

We stopped off for dinner in our sushi restaurant, had another good eat there. Managed to find a vending machine with pancake drink on the way back, so G was happy. Started organising for the next day. 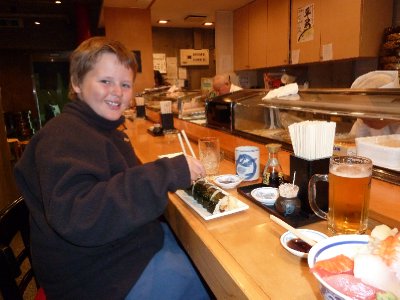 A fine feed of sushi

No Giant Pandas and the Meiji shrine

Up late this morning – some later than others.
We started the day by heading out to Ueno Park. Again it was clear and crisp with the sun shining. First stop was the Toshogu shrine in the park, where we see the first signs of real homelessness in Tokyo, with an area, neatly described by cones and barriers, where homeless people had set up there blue tarp shelters. 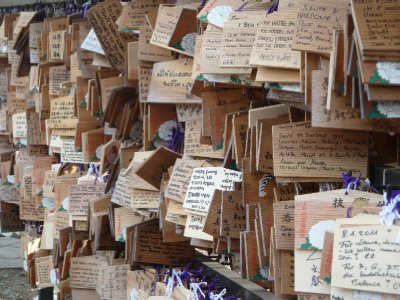 Toshogu was our first Shinto shrine, has a good colonnade leading to it, and the Hiroshima – Nagasaki flame memorial to remind people to battle for the abolition of nuclear weapons. The shrine itself is behind tarps, and only a picture can be seen.
We head into the zoo next, and get a surprise – THERE ARE NO GIANT PANDAS IN TOKYO ZOO. Not that anyone mentions the fact until you get to the front window. The last one died nearly 3 years ago, a fact our guide book does not mention even a 2010 edition. We have gone this far so we are heading in anyway. The animal enclosures here are not too big, and some of the animals look severely depressed – the bison being a standout. It may also be the temperature – I don’t feel like being outside when it is 2 degrees either. We have lunch at the canteen, which is reasonable prices, and has a good volume of rice, so there is fuel for the day ahead. We scout out the most popular of the animals and do a quick tour. We see the lemurs who manage to jump away each time I try to take a photo. Last of all are the RED pandas, who are restricted to a small interior cage at the back of the giraffes, and they seem a little stir crazy. 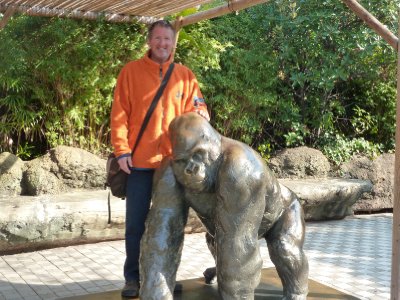 No pandas at Ueno Zoo, but plenty of Gorillas

A quick walk gets us to the Metro and off at Harajuku. Here we head over to the Meiji shrine. We enjoy the majestic cedar walk, admittedly with a few thousand other people. The massive torii to get through each of the areas are very impressive. They are each at least 12 m tall, and a reminder of how the Emperor Meiji was regarded. It must be noted that most of the historical structures in Tokyo are recreations after the bombings at the end of WW2 razed most of the city, but they have tried to be faithful to the original in most cases, with some modifications to materials used.
The shrine has a large flag stoned courtyard surrounded by a covered walkway where are posted many prayers and poems. There are some huge trees, and a large prayer wall where prayers can be written on tablets and posted for the priests to chant to heaven for you. On one side of the courtyard there is a wide expanse of stairs leading up to the inner shrine, and this is as far as we can get. Here, people make their prayers, and clap their hands to get the gods’ attention. The shrine continues beyond, but disappears into the gloom.
While we are there a traditional wedding party is led through the courtyard by some priests, looking very solemn for the occasion. The procession was very slow and deliberate, with the priests turning around when they reached the far side. A few words were spoken and then the priests scarpered, leaving the wedding party looking a bit stunned. We left soon afterthis, making our way back to Harajuku.
This is where the teens hang out and is where there are outrageous fashions on show. Well, it is supposed to be, today is just a crush, with more than its fair share of foreigners. We are getting nothing out of it, so off down a side street, but I get us lost and it is only G’s good sense of direction that gets us out as the sun sets. 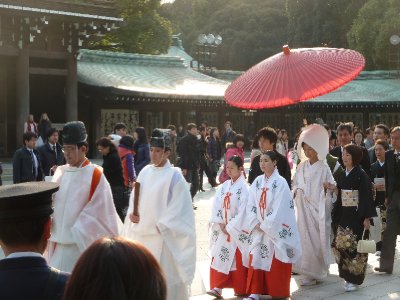 I have a couple of wishes, so we head off across the city. Find what I am looking for, a bike shop! But they do not have any Japanese language cycling tops for me to souvenir. Disappointed, we head on down the road for another look for models as the other day was a washout. This time I manage to decipher my own notes to get us close, but G finds the shop. Inside Leonardo’s is an Aladdin’s cave of out of production kits, and I finally find a kit I have desired since I first saw it decades ago – a 1/12 Honda F1 from the 60’s, and it is cheap – especially with the 30% off sale today only. Somehow I restrain myself and I do not leave with shopping trolleys full of models.
Shopped out, we get home and have a hot bath before heading out to dinner. A recommended restaurant is closed, so we get cheap and cheerful instead.