In the morning, filled on breakfast (western today) we head out onto 20cms of fresh powder. As usual, the pistes are groomed, but there are plenty of areas of powder available. I can even entice G onto the ungroomed Mogul Challenge on Maruyuma triple, where we fresh track on good powder. We stick to black runs up high with a good cover. Do make a mistake and head onto Champion A which is seriously chopped up and tough on a snowboard, and G stacks a bit. 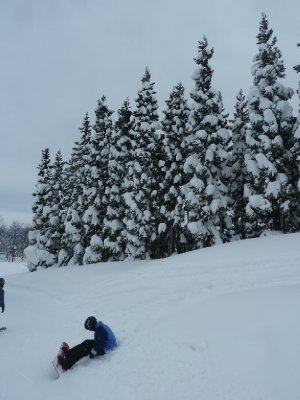 Resting under the trees

After lunch G has a lesson with Damien from Myoko Snow Sports (just like last year) working on basics to apply to the choppy stuff. D takes him around the place whilst I go for a tour. At one point I go on Hotel #5 lift, and go around catching exactly the same chair 4 times in a row! Number 12, we will always have that special thing. I like this run as there is a chance to ski the trees off to the side, although it is pretty chopped up by the end of the day and hard to make fresh tracks. But D has shown G a few secret powder spots that we can use later on. Mind you we only work out where on our last run, and that we have missed it, so maybe later... As we head home, the snow is showing patches of ice where it has frozen after the sun has melted it during the day.
Tonight the yakiniku is finally open so G is happy as he gets to bbq his own dinner, real boy’s food. He would come here every night given the choice (which he isn’t). And to top it off he gets a crepe for dessert again. More mundane stuff when we get back, with washing to be done and hung out to dry. We are also trying to work out when the best time to have a recovery day (the old bloke needs it) as we have been told there is a storm coming going to dump big time on Friday and Saturday.
Recovery day is today. Today is beautiful blue skies with no overnight fall, so the snow will not be at its best. We will be slack today and be generally lazy. After breakfast we spend a couple of hours reading, I get to the end of Tishomingo Blues by Elmore Leonard a fantastic read which just keeps pulling you along – you are sure it won’t end well but you have to keep going. We then spend three hours walking around Akakura – and there is not a lot to see, but we get to throw snowballs at each other, trees, crows and signs. There are some good viewpoints across the valley, but I am not much of a photographer. 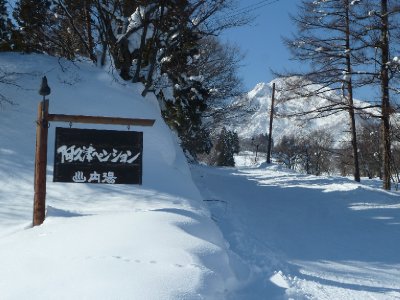 Back the Refle, I head up for a snooze and G (surprise!) is back to you tubing downstairs. With no skiing today we skip the onsen. As we have booked for 8 nights, not only was one night free, but we also get a free meal. And what a meal - Hikigawa san in the kitchen has cooked up a storm for us – the only two in the restaurant. We are served sashimi – snapper, clam, tuna, another fish which does not translate. It is all beautifully fresh and delicious, except for the clam, a bit tough and slimy for my taste, but don’t let me prejudice you. There is also a plate of venison sushi – a new one for us – and it is amazing with the ponzu sauce. A hot pot is bubbling away with crab, scallops, ugly fish (that’s what they said!!) enoki mushrooms, leeks and cabbage. There is a generous plate of tempura – prawns, mushrooms, capsicum, potato, kumera and all in a crisp light batter. We finish it off with rice cake in a red bean soup, hot, tasty and sweet. 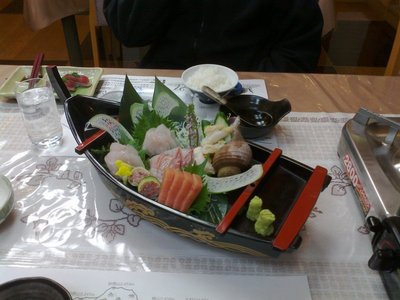 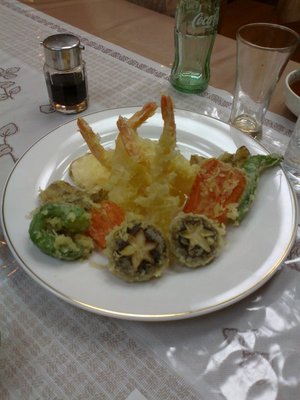 As I am full as a goog, I have to spend time reading before I am settled enough to sleep.
In the morning it looks great outside with a steady snowfall coming down. We get through brekky quickly to get on the 8:30 bus to Suginohara, and we are out at 9:10. Stupidly, your correspondent rushed over and bought tickets. Stupidly, because the guys in the queue behind me said ‘hey, how come the gondola isn’t going?” before getting on the bus and going to Ikenotaira. We were stuck with tickets and two tiny two seater lifts, which we had to share with around 50 other paying customers and 500 ski school students. This meant a wait of 35 minutes in the cold wind and snow to do a 2 minute run. NOT HAPPY. In fact after our 3rd wait, when we got to the top of the lift G suggested we take off our skis/board and walk up the mountain to track some of the virgin snow – I have got to tell you, it was the moment to make me burst with pride. So we shouldered arms and trooped 400 metres up the slope to make our own mark on the mountain. We got our 15 seconds of fame, that’s all it took; but it felt beautiful. We were very pleased with our tracks, and got to admire them for a further minute, when a phalanx of mogul munchers wiped them out as they groomed the higher slopes of the piste. This was the first sign that the gondola was going to start and open up so much more of the mountain; the second was the gondola starting. We raced down to the bottom and waited for another 30 minutes as they did all their required testing. But we were off! We got to track even more virgin snow, picking up the deep stuff on the side of the pistes and riding knee deep. We just keep going up and down, finding loads and loads of powder and loving it. HAPPY. VERY HAPPY. 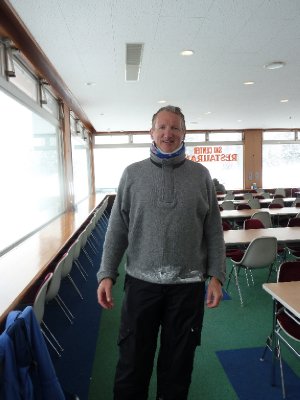 This is how deep the powder was!

At lunch strip off my jacket to see the tide mark of powder up to my waist. After lunch we push out to the #2 high speed lift which is nearly deserted. We head to the trees and the terrain park and get more untracked, fluffy, fantastic white stuff. I have a few stacks – it is like falling into a swimming pool filled with goose down (yes I have tried this). I could do this all day but the lifts will soon shut and we have to get the bus back to Akakura.
After the obligatory onsen, stretch and watching sumo, we hear from L again. Her crunched car has been assessed, it is repairable ‘but the repair will be worth more than the car’. So the insurance will probably write it off. That’s another little bit of excitement we did not really need.
G’s choice for dinner tonight, so we are off for yakiniku again. I take a photo of him, and show the lady in charge a photo (still in the camera) of G eating there a year ago. She is well amused, and now we are regular customers – if we come back in a year’s time! Tonight I have forced G to eat some veggies with the meat but I think I ate about 75% of them. Dessert is crepes again, which leaves me feeling precariously full. 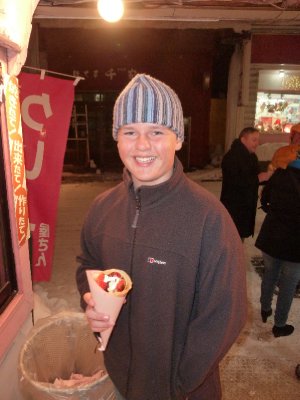 I love my crepe!

Previous Next Table of contents