We head off to Termini to get our tickets – we have gone for the Roma Pass, 3 days of travel, two museum entries and discounts off other stuff at 25 euros each. We jump into the Metro off to Ottavia station and head over to the Vatican. Into the museum first – not too long pleads G. We head into the museum starting with the pine cone plaza. 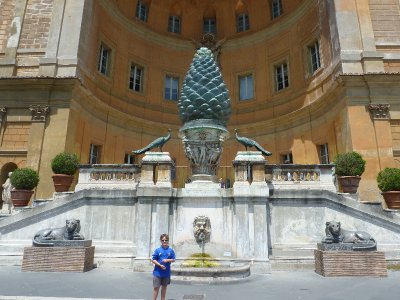 An idea for landscaping

This is a great space with some great works, including the pinecone and the massive head of Augustus. Then into a garden with roman statues and sarcophagi. Amazing the skills they had working with marble all that time ago. We head round through the statues of roman emperors and grand ladies and into the Egyptian rooms. 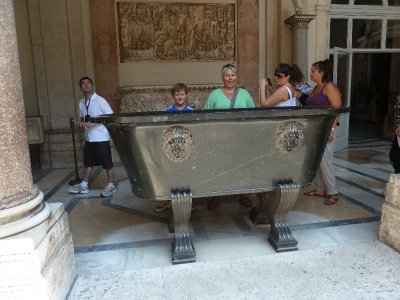 There we see more sarcophagi and even a mummy on display. Then through a few more roman statues and into the hall of tapestries. After this, through to the amazing map rooms where a pope had a painted maps of the all the regions that the pope had at the time. We try to spot a lot of the places we have been, but it can be difficult as half the maps seem to be upside down. A few packs of Americans bulldoze through these rooms to keep to their schedules.
Next are the Raphael rooms where there are loads of frescoes put together by Raphael and his students. Beautiful colours and compositions show a great example of Renaissance mastery. 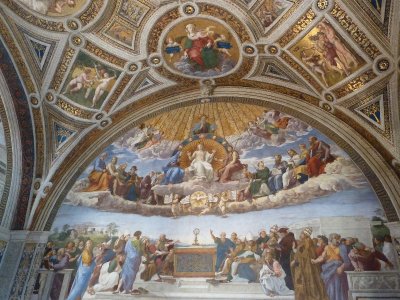 That Raphael could paint

After this we head into the Sistine Chapel, which is about 8 metres wide, and around 40 metres long. Michaelangelo has done a pretty good job on the frescoes here – and it seemed a few other people have heard of it too – the place was packed. We spent quite a while in here enjoying the sight. The Final Judgement which covers one entire wall is fantastic, and the ceiling is amazing. But the walls often get overlooked - there are some great scenes there too, by some of the other masters of the time. And they were done quicker than the ceiling too - it took six years to paint – imagine how much trouble I would be in if it took me that long to paint the ceiling... The Sistine Chapel is the one place in the Vatican you can’t take photos – whether it is because of security (it’s the pope’s chapel) or so they can keep a hold of all the merchandise I don’t know. But still there are plenty of flashes going off and the guards are kept busy telling them off and shushing all and sundry when the volume gets too loud for a sacred spot...
We join the rest of the thong, sorry, throng heading out in double time once the Sistine is done. 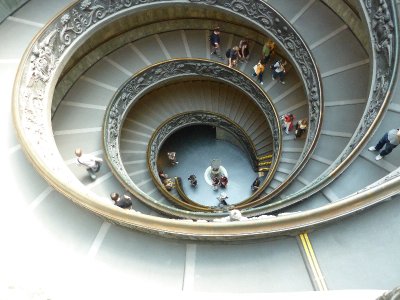 We are heading over to Basilica of St Peter to get a look around before it closes. G and I head up to the cupola. First there is a lift to get up the base of the dome, then you walk up the steps inside. There are really two domes, one inside the other. As you get higher, the walls bend further over which is really disorientating. 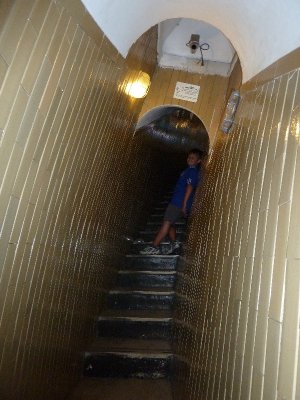 In between the domes

Next a set of steps and a teeny spiral staircase up to the top of St Peter’s and the view over Rome. The 360 degree view gives you an appreciation of how much green there is around the seven hills. From here you can see a lot of the Roman remains as well as the more recent additions. After a while we head back down again. 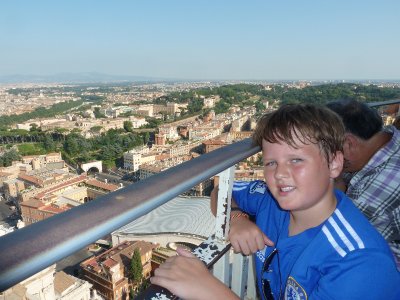 View from the top

There is not a lot of time to look around, but we do see Michelangelo’s very touching Pieta, and Bernini’s cover over the high altar, as well as the statue of St Peter, whose bronze foot is worn away from the pilgrims coming to touch him up. 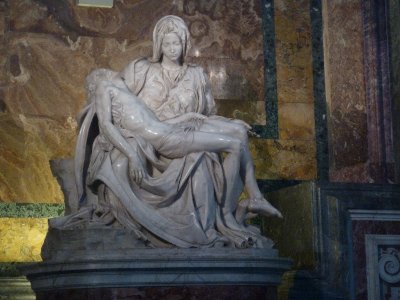 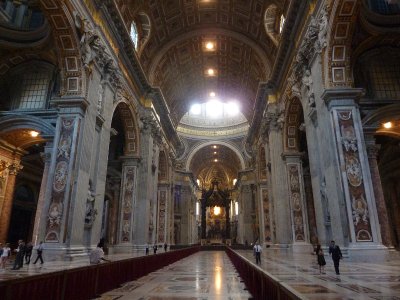 As I am chased out at closing time, I take a couple of photos – it is pretty rare to get a photo of the basilica nearly empty. A couple of photos of the Swiss Guard (because you have to) and then we head out to a disappointing dinner.
San Lorenzo, where we are staying, on first inspection seems to be a bit of a rough neighbourhood, but most of that seems to come from the mass of tagging everywhere. There are some good honest restaurants around, a thriving nightlife, in a uni accommodation area. Some places you wouldn't go after dark though.

Previous Next Table of contents